Why copper nickel is suitable for marine industry?

The chemical composition of Copper-nickel alloys consists mostly of copper, followed by a significant addition of nickel ranging between 8% to 45%. Copper-nickel alloys, or as known as Cu-Ni alloys may, or may not contain added elements. However, if they contain additional alloyants, minerals like Zinc, iron, manganese, or tin added to their alloy, it provides benefits. For instance, the inclusion of manganese to Cu-Ni alloys improves its electrical conductivity. Whereas iron alloyed with Cu-Ni alloys improves the erosion-corrosion properties in both high-velocity water as well as freshwater. Iron also promotes the formation of an adherent, uniform protective layer in water. This protective layer formed on the surface of these alloys improves corrosion resistance, primarily in high velocity flowing seawater.

Besides increasing resistance to general corrosion, the passive layer accumulated on the surface also against challenges in marine environments, such as pitting, crevice attack, as well as stress-related corrosion cracking. On the other hand, adding Chromium not only increases the alloys tensile strength; but also has a favorable impact on the resistance of the material to erosion-corrosion in high velocity flowing marine environment as well as to erosion by solids. The aluminum present in some Cu-Ni grades increases strength along with seawater and scaling resistance.

Alloys that contain copper between the range of 90% to 70% are well suited for use in the marine environment. Hence grades like 90/10 CuNi or 70/30 CuNi are considered for applications like heat exchangers, desalination plants, power generation, etc. There are several reasons why this metal is well suited to applications involving seawater. One such inference is the biostatic property of copper. A biostatic metal like this does not promote the growth of bacteria and other lifeforms. Hence, Cu-Ni alloys have been used for a long time to line parts of ships to protect against life forms like barnacles and mussels. This alloy also exhibits superior antimicrobial properties, while inhibiting biofouling, especially in extreme conditions. Copper-nickel alloys are effective in lowering levels of micro fouling. Furthermore, they have strong corrosion resistance properties in seawater and brine solutions. 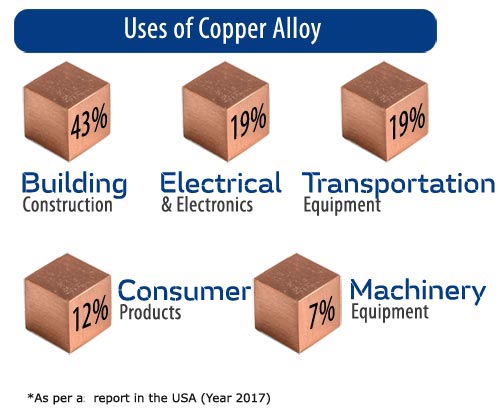 These alloys are also highly ductile with high formability properties, making them easy to shape. Consequently, it is easier to form pipes, tubes, fasteners, and other such components using either of the alloys. An area that makes 90/10 CuNi a sought-after alloy is its maintenance cost. As compared to some steel grades, the maintenance cost for this alloy works out to be almost 25% cheaper. And based on the alloys economic evaluation, the salvage value of these alloys are high. For instance, the salvage cost of CuNi alloys stands at approx 25% of the initial cost incurred for the material.  Copper-based alloys fairly regularly find use as cladding for marine environments. In shipping vessels, these alloys prevent the surface from becoming rough due to corrosion. And since they restrict biofouling in seawater, there is a reduction or lowering in the consumption of fuel. Thus, they prove to be a cost-effective solution for use in marine environments.

Copper by itself has a pinkish-orange tinge. When alloyed with nickel or other elements, the color dilutes and looks lighter. Hence, a shift in the tint of the metal corresponds to the inclusion of any substance in its alloy. Typically, smaller boats or yachts use Cu-ni fasteners or other components, solely for their appearance. Plus, it also helps that this particular metal is economical and exhibits superior corrosion resistance properties.